These distortions or energetic implants are seven J-Seals or Jehovian Seals, Metatronic Implants, Templar Seal, Templar Axion Seal, Cell Death programs (apoptosis), Crown of Thorns, and Zeta Seal.
The 7 J-Seals or Death Seals are located into the earth’s grid. The earth has 12 vertical lines or axiatonial vertical energy lines around the globe. The 7 J-Seals were implanted on earth’s axiatonal line 7, which correlates to the left side of the human body. These seals were created to draw Earth and its inhabitants into a Shadow Earth that will descend. If the J-Seals are not cleared from your body, they cause progressive deterioration of the body and sometimes severe illness if they are not cleared. These seals are responsible for many of the pains and problem areas that people have on the left side of their body because these seals affect the energetic circulatory system of the body. Once these seals are removed, the physical problems dissipate. The seals are located as follows: 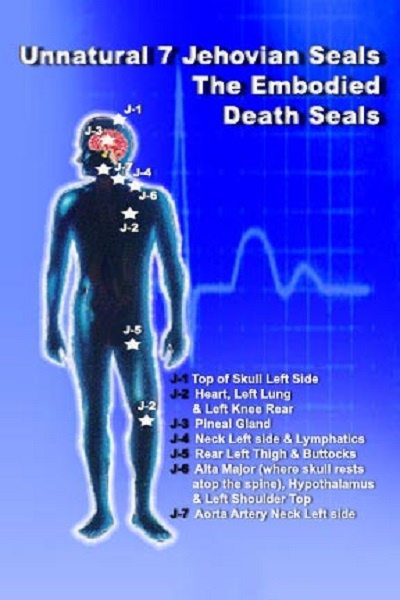 J-Seal 1: Top of skull on left side
J-Seal 2: Heart, left lung, back of left knee
J-Seal 3: Pineal Gland
J-Seal 4: Left side of neck and lymphatics

Metatronic Implants are known as the Tree of Artificial Life. They are a series of implants designed to rapidly reverse the activating template into Metratronic fall. It is the reverse shadow body as opposed to the ascending, evolving 12-dimensional body. Metatron is an entity that used code convolution. The Metatronic structure sucks energy.

Cell Death Programs is apoptosis, what science terms as cells committing suicide. Science believes
apoptosis is normal but it was never intended by Source/God for us to die and reincarnate. Cell Death
Programs has shortened humanity’s life span and kept humanity incarnating.

The Crown of Thorns is an energy configuration above the head of humans that distorts the natural
energetic circulatory system and blocks the receiving of the primal life force currents from your Higher Self and Source/God. The crucifixion was an energetic crucifixion to humanity as the crown of thorns scrambles the Universal currents to our chakras keeping humanity stuck in a 3rd dimensional frequency fence. Once this is cleared, many feel or see a metal plate being removed from above their head.

Zeta Seal is located in the 4th DNA strand, which blocks a person’s ability to evolve towards frequencies of unconditional love and higher dimensions. The 5th DNA strand is blocked from plugging into any of the lower strands. It’s a frequency fence. All beings born since 1748 AD have this Zeta seal distortion. It has created a blockage from experiencing astral awareness, astral travel, lucid dreaming, out-of-body experiences, intuitive gifts and causing difficulty in remembering dreams.